wonder if you can help I have a 2016 vespa GTS 300 with ABS and I have just bought a new digital speedo for it all fitted all ok but the water temp bars are not working now even showing up on the screen now the water temp sensor is working all ok because the electric fan cuts in when it gets over warm ...

what I want to know is it does not say anything in the booklet about the temp bars on a 16 model do not work etc etc .. ive checked everything the cylinder head temp works fine .. just the temp bars don't come on

Hello Sebastian, i have problem with GT200L SIP Speedometer. I already put all the connector in the right position, but the speedometer won't turn on and not entering self-test phase. When the 6pin connector was inverted, the needle jiggled and bottom part of the speedometer flashed. When i tried to put back to the correct position, nothing happened. Can you please send me the wiring diagram for the speedometer? this is my email ([email protected])

Thanks a lot and looking forward to your reply!

I´m not sure if it´s possible to make the bar-temperature gauge work on the facelift GTS models. I´ll send you an e-mail with the wiring diagram.

I would like to order the SIP speedo for my GTS300 ABS 17' too, but will it fit the 17' model or can i also do some wiring diagram to solve the bar temperature gauge problem.

Can someone tel me if SIP can supply the Conrad connectors, also would apoeiciated if i can have the pinouts diagram of the speedo sent to me on [email protected]

Did you solve the problem? I have a vespa 300 gts super Sport 2010 and i was interested in buying the speed/rev counter, but with these problems....

Don´t worry! On your 2010 GTS all features are working perfectly. The SIP speedo is a plug&play unit for GTS Models till the Facelift from 2014.

Hi Can you please send me the wiring diagram,

Is it possible that SIP posts a pin-outline from the backplug of the tacho?

Which pin is for what?

I am sure I can make a hack and get the GTS facelift bar-temp gauge to work. But in order to do that, I need a diagram which pin on the back of the tach is what.

If you use the new 2016 SIP Digital Tacho on a facelift Vespa GTS (2014 and newer), the temperature Bar gauge in the bottom left-hand corner is not working. This is as designed, but in fact pretty sad because with a few changes, we can make it work. And it looks cool. The trick is this: The facelift GTS has standard two NTC's build in the coolant temperature sensor. But only one is used. To make the Temperature Bar working, we will simply need to use the second NTC and connect that with the SIP Tacho.

You need to do 3 things:

1) Modify the connector on the temperature sensor

2) Modify the connector to the SIP tacho

This is what we need to achieve:

6) A multimeter (for testing the contacts, measuring resistance)

The green temperature sensor in the engine has 4 flat pins. Each pair is connected to an NTC. Per default, only pin 1-2 are used for the temperature warning light. Pin 3-4 are connected to the second identical NTC.  Both NTC's are identical.  We will need to connect pin 3-4.

Pry-off the green connector from the sensor. Open the connector at the back (cable side).

Remove the two dummy pins from the connector. You don’t need them. 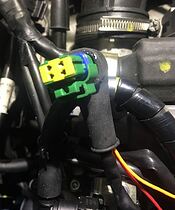 Carefully hold the two wires and the plug and reattach it to the sensor on the engine. Don't use force.

Test if it works: measure the resistance between the two wires. It should read anywhere between 2000 and 5000Ω. If you have that, it means that the new pins in the plug are properly connected with the NTC in the sensor. If your Ohm-meter reads ‘infinite', it means that the two new wires are not properly connected and you need to recheck your plug-fix. One of the pins may be damaged.

Modify the Plug on wire harness from the SIP Tacho

We
need to use pin 17. The number is clearly marked on the plug in the standard
wire harness from SIP, this connection has no barrel pin in the plug, so we
need to add a barrel pin to the plug. 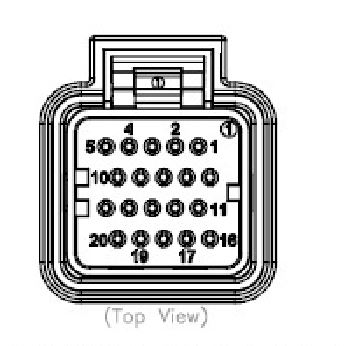 For the new barrel pin, we use a standard round micro female ‘Steckschuh'. Conrad artikel nr. 526164.


Shift the new wire with barrel pin into the number 17 hole from the cable side of the Tacho plug.

If the hole is too tight, use us 2.5mm drill and widen the number 17 hole a little bit so the pin with wire fits into the plug.  When properly fitted, you will see the new barrel from the other side of the plug.

Carefully refit the connector to the back of the tacho. Don't use excessive force.

Connect one of the wires from the temperature plug in the engine to the new wire at pin 17 to the Tacho. It is not critical which wire you use, any of both pins work.

Connect
the other wire from the temperature connector to a ground point in the engine
room using a ring crimp. I used one of the screws. Not critical which one you
use, as long as it is a good ground connection.

The sensor is now connected to the tacho.

Test
it, and switch on the ignition. Presto…!! You will have now the beautiful
temperature gauge on the SIP tacho working for your 2014-15-16-17 GTS… 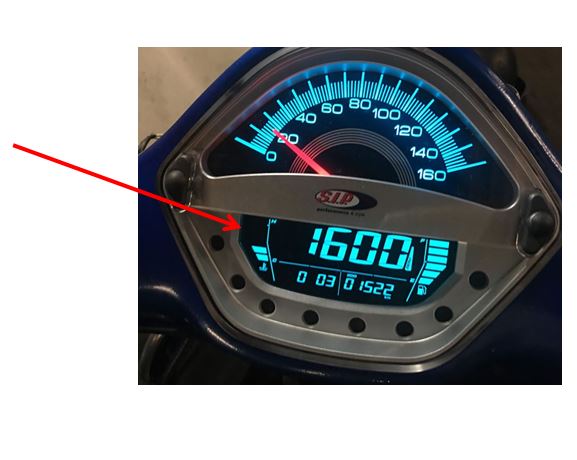 The standard temperature is 3 bars, at least on my 2015 GTS.

In the SIP Tacho setup menu you can define at how many bars the alarm will go off.

That would be great; mrlandman(at)gmail.com.

Same problem with me: 125 GTS ABS 2015, everything works except the temperature bars. It was one of the reasons I bought this product. We need help from the tech team here. 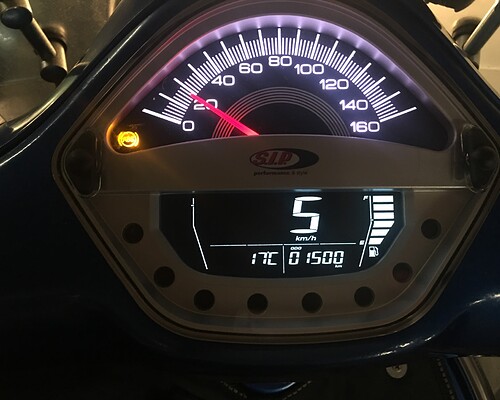 Has anyone by chance the diagram of the odometer cables of a 2014 vespa gts without ABS?

the original piaggio marker that you mount has the following reference: 1D000502