In 2008 we will not only have the World Vespa Days, but even more there will be the WORLD VESPA WEEK in Treviso, end of may! SIP Scootershop will support and sponsor this event.

Here is the information of the organizer:

Treviso Vespa Club has the pleasure to inform you that is organizing the 2nd International World Week®, Treviso – Italy”.
This event will take place in Treviso on the following days: Thursday 29 th May, Friday 30 th May, Saturday 31st May, Sunday 1st June and Monday 2nd June 2008.
This five-day event will be developped in 5 days within a fully equipped area where lots of different activities will be carried on such as: Exhibitions of Gymkana, Trial, Lessons on safe driving and first aid, exhibitions of antique objects and gastronomic stands.
We have decided to inform you so in advance about this event because we do believe in the great passion that we share and we wish to attract the attention of Vespa’s lovers all over the world. The number of people expected from Italy and the rest of the world is about 8.000 Vespa. We have arranged an area of 140.000 m2 and we will be supported by 7 clubs, (Pederobba Vespa Club, Montebelluna Vespa Club, Sei Giorni Vespa Club, Sacile Vespa Club, Vespa Racing Team, U.V.A. Generation and Moto Club Ariano).
In order to gather all of us in one place and to create an universal twinning in the name of Vespa, we would like to build a tower 5 meters tall and 10 meters large, by joining all the band shields of all Vespa Clubs and we have also planned to create a video point where we will project the short videos received from the Vespa clubs all over the world. For this reason we invite you to record a video (lasting 30 seconds maximum) of your club and to send it together with your band shield to the address above mentioned. We ask you to inform all your members club about this event and to visit our website www.worldvespaweek.it to get all the latest news about it.
Registrations will start in December on the official website (see leaflet here attached).
Treviso Vespa Club Staff and all the local Vespa Clubs which are cooperating with us are working with a will to realize this event and we hope that it will be remembered in the history of the Italian Vespa. Sure that World Vespa Week will gather all lovers of the most popular metallic insect of the world, we remain at your disposal for any further information you may need.

more news from the president:

World Vespa Week ®, was thought so great that we realized that we could not organize themselves an event so large, although in 2006 we received to our international gathering 2,500 vespisti. That is why we called to share this dream 6 clubs (Vespa Club Pederobba, Vespa Club Montebelluna, Vespa Club Six Days, Vespa Racing Team, UVA and Generation Motorcycle Club Ariano), chosen for their social skills.

Different Ways to be vespisti can find their space in a unique environment differently from how it was until today. It will be an event vespistico to 360 degrees. We chose to make an event of a duration of 5 days, to give way at all vespisti to share this great feast full of appointments each day different. Since June 2'08 day holiday, each participant can fully enjoy the weekend (Friday, Saturday, Sunday) and use the holiday on Monday (June 2) as a day return home.

With aggregation that every rally expresses, it was decided to create in the area of customs Treviso "Puerta del Leon" in Via Serenissima a real park equipped with over 100,000 square meters.: VESPA FAMILY. Inside the VESPA FAMILY each participant will: staying in the adjacent camp, eat, meet with other vespisti to stay in the company, attend concerts and evening shows, exhibitions and visit the stands, request any type of information and subscribe to events . Each participant will also be able to enjoy all the facilities made available as car parks, info point, stand gastronomic, various markets, etc. ...

Some of the events organised for the 5 days will be: Tour of Prosecco DOC, Asolo and its surroundings, Treviso centre of water, Dolomites Tour, parade of 100 headlights low in Treviso and more… Inside the VESPA FAMILY held several events such as demonstrations of acceleration, tournaments gincana, wasp cross, wasp trial, afternoon and evening concerts, exhibition stands, displays vintage, road safety courses, courses in first aid…

Ours is a movement united and compact that does not forget history and that the awareness of its breadth and diversity draws strength. This is why we are working on an event that will hear the voices of more than 10,000 Vespisti!

In our World Vespa Week ® each club in the world will have its own space. We could dance until late in the night or take a course on safe driving. It will be finally a rally multi - languages "where even the lights can make low bids acceleration and parade through the streets of the town centre!

World Vespa ® Week will be a meeting open to families, because from an idea of our friend vespista Austrian we designed the "Gartner Kinder park" where you can find a free baby-sitter.
It will be a true worldwide gathering: we are preparing "spaces" and surprises even for clubs that will come from further afield, clubs more…

We invite you to learn more about the rally World Vespa Week ®, visiting the website www.worldvespaweek.it where you can learn about the program in detail, download the informational pamphlets and even subscribe!

If there'll be you, will be a rally which will enter into history! All this will be possible here because the passion is at home: "we do not wasps ... The consume! "

and now the video went online, in high definition:

the SIP Scootershop Team is back from the trip to Italy:

Ranking among the absolute must-go’s in the diary of many Vespa enthusiasts, the Eurovespa has lately seen its name changed to World Vespa Days for no obvious reason. Does the name give a hint that, someday, this event might be staged in Brazil? No one knows for sure. This year, the World Vespa Days, which took place in Sicily in 2008, are facing new competition from the North of Italy: the World Vespa Week! The combined effort of five of the big and dedicated Vespa clubs from the Veneto have resulted in an event of truly mind-blowing dimensions: www.worldvespaweek.com

As some of the hardcore scooterists among the SIP Scootershop team won’t shun the hardship of departing on a long-range trip every year, we found ourselves heading for Treviso before long. Realizing that we know almost every single signpost along the old Brenner pass by heart, we decided to pepper the trip with a couple of challenging pass rides this year. Therefore, we left the well-known route of the old Brenner at Sterzing in the direction of Passo Lavazé and Passo Manghen. Especially the latter pass is a true highlight with the road narrowing to a mere 2m in width, giving the scooterist the feeling of riding through a time long gone. A formidable scenery right in the middle of the undulating Dolomites foothills, which, unfortunately, in our case was clouded by heavy rainfall pouring down on us. The rain would not stop until Bassano de Grappa at the Southern side of the Alps, giving us ample opportunity to figure out whether our rain gear was worth all the money. We reached Vicenza, which is about 80km away from Treviso, on Friday night, all tired but with weather conditions significantly improving and were thus able to finish the day barbecueing with Italian friends. On Saturday morning, we headed for the scene of the action, located quite conveniently near the heart of the city at the customs area. While approaching the spot, we were already surrounded by Vespas, and the closer we got to the hive, the more the humming and buzzing. The spot proved to be huge, with a large shed accomodating the spare parts market and the dealers’ booths while a whole alley of stalls of food and beverage caterers led the way through an equally huge beer tent. Additionally, there were bars, specially designated parking areas for the “Faro Bassos”, the “Fenderlight Vespa”, and, of course, an enormous camping ground. At the Southern end of the area, there were both a drag race and a cross track. With our jaws dropped in the face of such rare to never seen dimensions, we started off by putting up our tents, saying hello to a couple of old friends and sipping a cold beer. The program that was offered by the organizing team was nothing short of incredible: countless organized rides into the near and not-that-near neighboring areas, parades, rides into the historic old town of Treviso, drag races, trial and cross track, spare parts booths, an awesome Vespa exhibition displaying classy oldtimers, a special area featuring more than 100 fenderlight Vespas, wi-fi for free over the whole area, technical support using two Vespa lifting platforms, live bands playing concerts every night backed up by DJs – you name it, they offered it. The whole shebang left the visitor forced to plan in detail what exactly he wanted to take advantage of as otherwise he was left under considerable stress.

Sunday saw a parade under police supervision comprising the enormous number of more than 5.000 Vespas – end endless convoy winding its way through Treviso and the surroundings. Passer-bys were lining the streets in delight, waving happily and enjoying the unfolding spectacle.

We left the spot on Sunday night heading towards Jesolo in order to devote ourselves to the pleasures of a quick and refreshing swim in the Adriatic Sea. Afterwards, we made our way to Cortina d’Ampezzo, Passo Tre Croce and back towards our hometown riding along our old friend, the Brenner pass. The whole thing turned out to be another successful trip and a remarkable event. We are more than curious to see whether the Vespisti at Treviso will be able to stage an event of such quality and size every year.

Pictures can be found here: 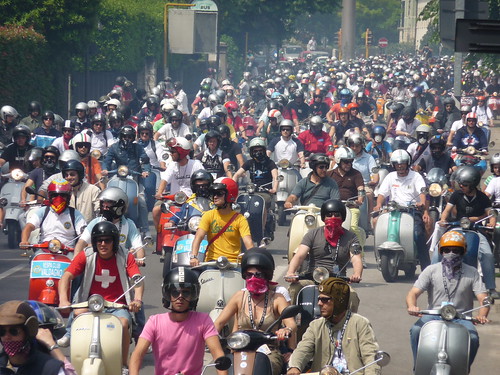