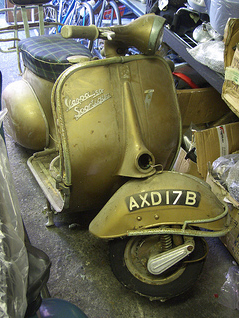 You won't believe this, the other day on Monday, an old guy who I play at my squash club called me about an old vespa he'd seen. He works as a recovery driver, collecting broken down cars/motorbikes & delivering them to garages for repairs. Anyway he'd gone to a town called Dunstable in Bedfordshire (approx 55km north of London) to collect a Fiat Panda from an 85 year old lady who could no longer drive it as she has arthritis & is very immobile. When he was in her garage he spotted a vespa side panel underneath loads of blankets & garage junk. He had a quick look & saw it was a 1964 150cc vespa. He called me knowing I'd be interested; so I called the lady arranging to see her on Tuesday morning. It turns out the vespa was last taxed in 1969 & had sat still in her garage since then!! The lady bought it from a dealer in Luton in approx 1965/66 & used it as transport, even carrying around her young daughters on the back. They got a car a few years later & the vespa sat idle from '69. Her late husband in the last few years had taken out the engine & taken it apart; he couldn't get it back together again & was now in various boxes alongside the vespa. Anyway I asked how much she wanted & she said "whatever it's worth to you dear"...! I told her it needed some work, which it does & offered her £150.00 which she accepted! She wasn't naive & I think was tired of thinking about what to do with it & was relieved to be rid of it to be honest.

Anyway, I collected it last night after work & dropped her off at my dealer (Retrospective Scooters) in NW London this morning. I've asked them to clean it up & put it all back together totally as is using all the original parts where possible. As you guys probably know this is essentially a VBB1T, produced under licence by Douglas in Bristol, pic of original Douglas brochure here  http://www.flickr.com/photos/sportiquefreak/6130139264/in/faves-gs3vespa/

Some digital pics I took last night & this morning. First three taken in situ in lady's garage, others taken at Retrospective this morning
http://www.flickr.com/photos/gs3vespa/sets/72157630432627236/