Hello there. Can anyone tell me if the S.I.P tubeless rims will fit as a spare wheel under the left hand panel of a P.X ? Thanks. Mongo.

Thanks for your interest chaps, much appreciated.[:D]

i apologize. my friend is running the SIP 2.50 tubeless rims with 100 x 90 x 10 tires and he said it fit. i'm going to try to get some photos to see how/why it works for his spare. i don't think he mentioned it, but maybe he's not able to bolt in the spare either.

quathafi, i don't know... maybe his studs are longer. and i agree - it would be nice if SIP had a solution. or atleast say the rims may not work as a spare. (i don't recall seeing any kind of note/tip like that, do you?)

if i can get the photos i'll post them, heggie

Just a thought, you could use barrel nuts on the top two studs and then bolt the wheel to the barrel nuts. Use a longer bolt for the bottom.

Barrel nuts like the one on the head to fix the cowling to.

in case you missed it, someone has an answer for us... it was posted under - sip tubless spare. - in the community. check it out.

No it's not a trick question. I was told by a reliable source that they don't which is why I'm asking. I'm hoping that either somebody from S.I.P or somebody who has one fitted or has tried to fit one will answer. Like you, I thought that they obviously would.

Does it fit there?

Well, yes and no. Yes, it sits in place (supported by the battery) but can't be secured on the designated studs. I think the wider 2.50 design as opposed to the standard's 2.10 design is the reason for this. Or maybe I need longer studs? 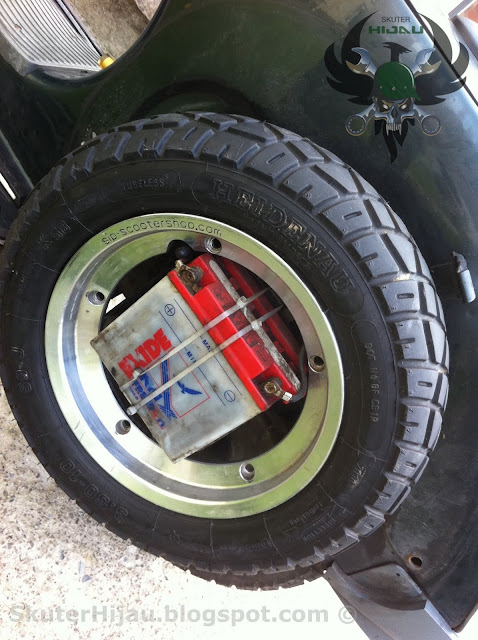 Tried the flip side as well which was deeper than the normal (valve outward) side but no luck with that either. Fortunately, with the side panel on, the spare wheel stays in place. I went on with my routine on the Vespa for about half a day in city centre traffic without any issues. Not an ideal solution as I would have preferred that the wheel be properly secured to the frame as Piaggio intended to but at least it's a workable option. 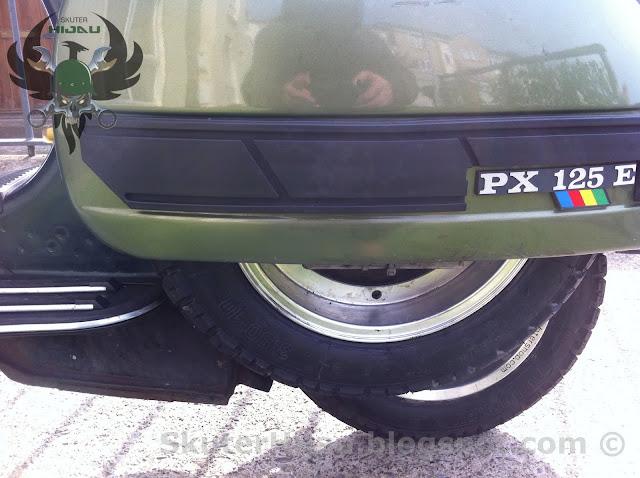 Would definitely appreciate it if SIP had a solution to this...

Yeah...would've thought the same myself. Maybe it's a trick question [:)]

alright... i finally got ahold of my friend that has sip tubeless rims. he said he's running 100 x 90 x 10's and they do fit in the spare/ left cowl of his px. hopefully qathafi will still double check this weekend like he said and let us know. ( just to be sure.)

buy the way, my friend says they're great rims. has them on both his px and his rally. said the only down side is mounting the tires on the rim. (maybe qathafi can give us his thought on that too.[:D])

so, that's what i've got so far. it's been fun. later, heggie

is there an echo in here?

you would think SIP would say in the item description if it does or doesn't fit as a spare - wouldn't you? or atleast say - "this item will not fit in the spare cowl area" (or something like that.) if it doesn't fit in there.

by the way... what are your thoughts on the tubeless rims? like? dislike? tire mounting and such?

thanks for your help! i look forward to finding out. - and will look for your post.

Anyone come up with a solution yet?

I am using standard split rims as spares at the moment but if I get a puncture on front or rear wheel where do I put it?

Don't much like the solution of having it loose or supported by the battery.

Wasn't too pleased when I realised this myself but:

1. Maybe it's just my PX that has that problem. More input from other people would be good. Better still, some clarification from SIP plus a short description on the item page itself on the matter would definitely be helpful.

2. I suppose one of the main points of going tubeless is that users of older scooters move away from the spare wheel itself. Like 1965davew pointed out, rather than have a spare wheel, one would carry around a tubeless repair kit in the glovebox and hope for the best [:)]. I use the Slime stuff myself. Still, if this was the case (the rims were never meant to fit on the spare wheel holder), I would have preferred to know before i actually bought the rims...

Hello there. Can anyone tell me if the S.I.P tubeless rims will fit as a spare wheel under the left hand panel of a P.X ? Thanks. Mongo.

please keep me updated (and post it here.) if you find the answer somewhere other then on the sip forum. when i save up the money i was going to order three rims (one for the spare cowl on my stella) and i just assumed that since it fits the same on the hub-it would fit the same as a spare in the cowl. maybe the only difference would be if you went with a tire wider then 3.5 x 10" - but even then it seems like there is a bit of extra room for it under the panel. i guess i didn't think about the spare tire area enough. thanks.

No it's not a trick question. I was told by a reliable source that they don't which is why I'm asking. I'm hoping that either somebody from S.I.P or somebody who has one fitted or has tried to fit one will answer. Like you, I thought that they obviously would.

I was going to take off my front wheel (Heidenau K58 on SIP tubeless rim) this weekend anyway to put on a tax disc holder onto the mudguard. Will see whether the wheel will fit the spare wheel then and keep you posted.

for me the reason for replacing with tubeless has always been one of safety. If you have ever had a blow-out at speed on tubed tyres then you will know what i mean.

I still want to keep the facility of being able to do a quick roadside wheel change if the need arises, as piaggio intended.

What about extending the spare wheel studs by using an extension nut (like between cylinder head and cowling) and then bolting through the wheel into that? Anyone tried this or have another method?

heggie...no worries man. Like I said, the thing not fitting could've just been exclusive to me and some other people with the same specs. The K58 tires are slightly fatter than your usual tires and God only knows what went on with my PX before I took ownership of it. For all I know the spare wheel holder could've been an after market addition to my PX.