Our new SIP Speedos for Vespa PX and PV/Rally are on the market for a while now and, as we think, are somegreat new accessorie parts.

Right now we are working on some new models, e.g. the shell shape speedo, PE, PK and Vespa 50 special. And, yes, we are thinking of a Lambretta Version as well. We have come up with 4 different design proposals for you guys out there, and would like to ask you to enter in this small survey and let us know your candidate. You can also discuss the topic, propose totally different designs or simply praise us for being as phantastic as we are... 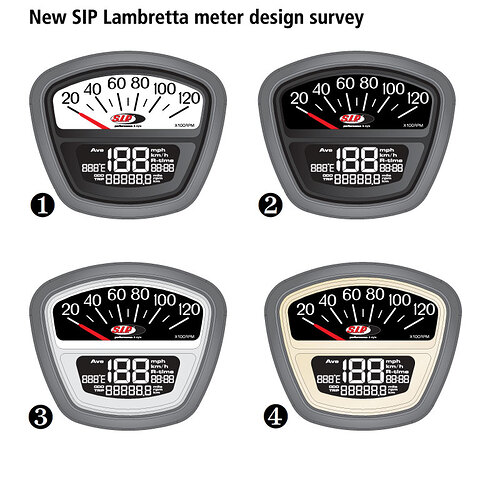 any chance of one thats completly digital?

we thought about that option as well, but then when the bike is parking, the looks are not that much original as it could be, so we preferred the version that is out now.

Come on give us an answer when they coming in?

What about Cream with white face?

Its number Two for me, when can I order one ?....a mate has one on his old time Vespa and its the mutts nuts.....would be better if you could use a speed sensor rather than the lammy cable and worm.

When are they coming in: I have one on back order too!

It's a simple question Ralf: when do you think you will be getting these into the SIP stock and out to those of us who have back orders?

I don't want to be kept asking 'do you want to stay on back order': the answer is YES, but please: WHEN are we likely to see it?

I'm not asking you to tie yourself down to a date but please give us some indication: a guess even!

We have found these very easy to install

hey guys, our designer came up with another 5th version. White faceplate and white LCD. What do you think of that one? 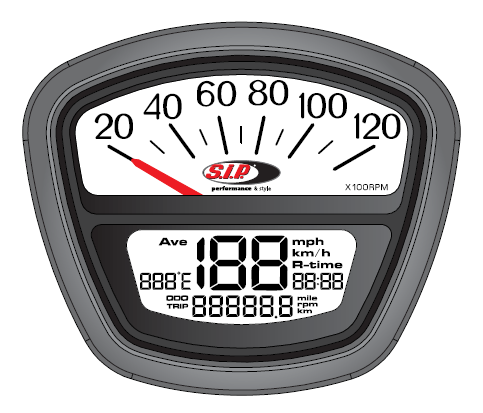 few guys would like this as an option :D

what colour is the back light? blue ?

hey guys, our designer came up with another 5th version. White faceplate and white LCD. What do you think of that one?

Furthermore if it was back-lit with a replaceable light you could change the color to suit your tastes.

This would allow more selection by your customers, yet no further expense in stocking at dealers, just carry the diff. color bulbs.

An L.E.D. added on it's face with leads would also allow those who have Gas gauges, EGT Monitors, Rev Shift sensors, ETC... installed to use the LED as a limit indicator.

bit late for me to reply...

but i really like the white on white option for the speedo meters.

when they going to be available i have one on back order?

Thought all that was sold at the Iow was shiny mod tat and associated tupperware?

Yeah i second these questions. can you do us all a favor and let us know approx when you expect them to be on the market? and secondly why you have chosen to use the lambretta cable and worm as opposed to the more modern sensor set up? Also while im asking can you confirm what functions the speedo will have?