I have installed a new DR 75 kit from SIP on my PK50XL2. It has a 16/15 carb and a Sito standard exhaust. The powe ron low rpm's has increased, but there is not much power to find over 40km/h. I have tried with 70 and 75 main jet, but the result is the same. Do I need to change the ignition setting, or does the XL2 have any sort of restrictions on the intake side that should have been removed? It will not even go over 50 km/h on a flat stetch, and that seems a bit weak for a 75cc..

Have you changed the original exhaust manifold (which is very chocked inside) with the open one?

I was talking about this, the connection between the cylinder and the exhaust 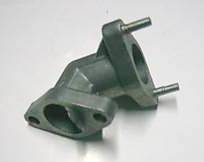 Both the sito and the sito plus are like stoppers for the engine, the former reaching with difficlulties about 6500rpm, the latter about 7000rmp (about 5km/h more in your engine), no matter how much the engine is tuned, so overrevving is almost impossible. I also suggest you to substitute the standard 14 cogs primary gearing with the 16 cogs by pinasco; you have just to open the clutch case and will gain 5-8km/h.

I am now running a 70 main jet in my 16/15 original carb. Have also tried a 75. The exhaust was changed together with the cylinder kit, to a std Sito. Both ordered from SIP together. I was recommended to use this one rather than the Sito+, to prevent the engine from overrevving. The exhaust elbow is not restricted, but someone told med that the XL2 is restricted on the intake side instead. Maybe I should try to refit my old Piaggio exhaust, just to try it? It is not in very good shape, though..

What carburettor setup would you suggest for my XL2? I changed my main jet from 75 to 70, without any change in behaviour. Should I perhaps go back to the original 65? As it is now, it has problems reaching 50 km/h and is nowhere near 60-65 as promised. It runs well on low rpm's, but on higher rpm's it does not sound quite right. Any good suggestions on where to go next?

This may seem a bit late as ive just joined the forum!!

I had a pk50xl2 a few years ago i had the dr 75 kit and had this constant restriction, it would only get up to 60km/h but then i looked into the gearing it turned out my primary drive ratio worked out at 4.9! so i ended up buying V50/moped gearing at 3.72 and no word of a lie...it use to get up to 80km/h

I hope this helps!

I agree with magnuskn reg. the exhaust.

But a upgearing is not necessary.

The problem must be another.

Try to check the exhaust and tell me the jetting of the carburetor.

As mentioned, I already have got the unrestricted manifold. Can the primary sprocket really be changed from 14 tol 16 without changing the big one? I would believe that the fitting would be too tight?

Has nobody heard about an intake restriction on the XL2? Since it is running on an unrestricted elbow and has a 16/15 carb, it seems likely that it might be restricted elsewhere..

Ok, sorry. Yes the 16 cogs pinasco (not the piaggio for vespa special!) fits perfectly, it has been used by a lot of people for about ten years and never problems. It is just a bit noisy but nothing to worry about or to be annoyed. The noise does not signify bad functioning (after all the straight cogs gearings are much noiser). But first you have to find out what problem you have in your engine because 40 km/h is not possible not only for a 75cc but also for a simple 50cc with unrestricted exhaust manifold.

You might want to try and change both the gearing and the exhaust.

The gearing is very short and thus very restrictive. I think the exhaust also has some sort of restriction.